Trail of the Ancients

Mesa Verde and Canyons of the Ancients 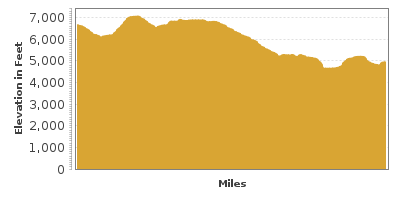 Trail of the Ancients explores the civilizations of the Anasazi people from as early as 800 A.D. Although this scenic route has some dirt roads, the incredible views and history are all well worth the trip. The route can either be done by itself or by extending one of our many other related drives. 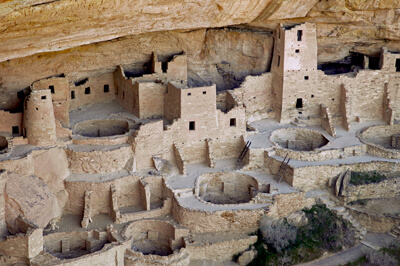 The scenic drive starts on US-160 at the Mesa Verde National Park (H1) in Colorado, home to hundreds of cliff dwellings built by the Anasazi People between A.D. 450-1300. Mesa Verde is a World Cultural Heritage Park designated by UNESCO and you can spend days here, exploring over 4,500 archaeological sites and extraordinary setting. If you are doing this drive in one day — don’t miss the following highlights. Most cliff dwellings are only accessible via a ranger-led tour and tickets must be purchased in person at the Far View Visitor Center. Make this your first stop if you plan on visiting Cliff Palace, Balcony House or Long House. Visit the Chapin Mesa Archeological Museum, which features displays and dioramas of Ancestral Puebloan life. The nearby 130-room Spruce Tree House is one of the few free self-guided tours. The 1/2 mile round trip walking tour explores one of the best preserved cliff dwellings. Consider a scenic side trip on Mesa Top Loop Road, a six mile driving loop with short paved trails along the route to access some of the sites and views including Sun Point Overlook and Square Tower House. Up for a hike? Delve into the fascinating past on the 2.4 mile round-trip, Petroglyph Point Trail which begins near Spruce Tree House, or the 2.4 mile round-trip Spruce Canyon Trail.

From the park, the drive heads to the town of Dolores by following the US-160 west and CO-145 and CO-184 north. The premier archaeological museum, Anasazi Heritage Center (M1), honors the history of the Anasazi People and other Native cultures in the Four Corners region with exhibits on archaeology, local history, and lifestyle, including how they weaved and prepared corn. A short trail will bring you to two pueblos. The Anasazi Heritage Center is also the visitor center for Canyons of the Ancients National Monument, which protects more than 6,000 ancient ruins. Our drive will be heading there shortly, so pick up any required information before leaving.

From Dolores, head west on CO-184 and then north on US-491, passing pastoral farmland with mountain peaks in the distance. As you approach the town of Pleasant View, turn right onto Country Road CC. Heading west for 8.5 miles, you arrive at Lowry Pueblo (A1), an Anasazi ruin constructed around A.D. 1060. It housed approximately 40-100 inhabitants who subsisted as farmers and made elaborately decorated pottery.

Retracing back a few miles, you arrive at Country Road 10 which heads southwest towards Utah for 20 miles on a dirt road. After crossing the border into Utah, stop at the Hovenweep National Monument (A2). Along the canyon rim stand two, oddly-shaped stone towers created by the master builders of the Anasazi’s people, the meaning of which are still unknown. The Monument also has a total of six groups of ruins and is known for its square, oval, and D-shaped towers. Explore the Square Tower Group by walking the two mile loop trail from the Visitor Center. Stargazing is a wonderful way to immerse yourself in this peaceful and moving setting. Make a night of it with camping which is open year-round on a first-come, first-served basis.

Our scenic drive comes to an end as you arrive at the US-191 intersection. From here there are many options to continue the adventure. Consider exploring Utah’s Bicentennial Highway by heading north on US-191 towards Blanding. Heading south towards Bluff allows you the opportunity to either drive west to Mexican Hat and Monument Valley, or east on UT-162, past the Colorado border on CO-41 and then south on US-160 to Four Corners Monument (V1). This is the only place in the United States where four states meet (Utah, Arizona, New Mexico, and Colorado).

If you are doing this drive in reverse or want to avoid the dirt road, the San Juan Skyway begins right here and offers a spectacular close-up view of several mountains taller than 10,000 feet high!