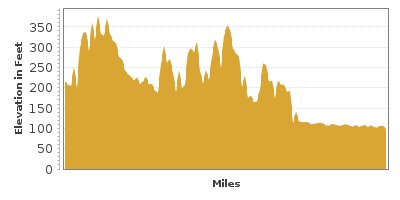 The Cane River region is steeped in a history that reveals riches, struggles, slavery, the Civil War and more. Through the years, a melting pot of Native Americans, French, Spanish, and African people were drawn to the river, a lifeline that feeds the agricultural landscape. Today, charming towns along this route exude a gentle Southern hospitality, welcoming you to explore the past through historic plantations and homes. 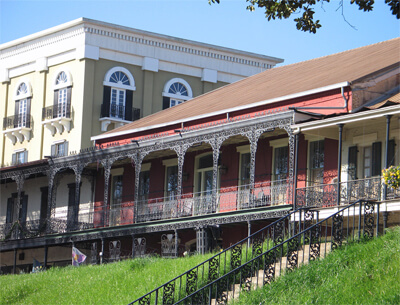 The drive begins in the Allen Parish touted as the “Gateway to Cajun Country” and travels to the Magnolia Plantation Complex in Cloutierville. You can get to Allen by taking I-49 S from Shreveport, then take exit 148 to LA-485 continuing south.

Visit the Adai Caddo Cultural Center (A2) which celebrates the history, culture, and art of the Adai American Indians. View artifacts, traditional dance demonstrations, art and more. There is an admission fee.

Natchitoches (NAK-uh-tish) was founded in 1714 by Louis Juchereau de St. Denis, and is the oldest permanent settlement in the Louisiana Purchase. Cane River Lake is the heart of this region and many plantations were built on its fertile banks, creating a thoroughfare and trading hub which ultimately led to the diverse culture and heritage we see today. Though it meanders like a river, Cane River is actually an oxbow lake.

The Natchitoches Historic District (A5) encompasses 33 city blocks with more than 100 historical structures that include commercial and residential buildings, forts, and churches. Take a guided trolley or horse drawn carriage tour, or experience a different perspective by pedal boating on Cane River Lake. Stroll through town, admiring graceful old homes with sweetly manicured lawns and flowers that tumble with a burst of color over ornate wrought iron balconies. Discover unique shops, and many restaurants offering a chance to sample the local flavors. This road trip is a foodie destination, the flavors intrinsically tied to the culture, a blend of French, Spanish, Portuguese, Italian, Indian and African. Indulge in Cajun and Creole delicacies such as jambalaya, gumbo, crawfish etouffee, bananas Foster, and renowned Natchitoches meat pies. The meat pies are so venerated, that a Natchitoches Meat Pie Festival is held every September. Each season is host to a party, among them, the Cane River Zydeco Festival and Poker Run in August, the Adai Caddo Indian Nation’s Annual Pow Wow in October and the Christmas Festival of Lights in December.

Within walking distance from the Historic District is the Fort Saint Jean Baptiste Historic Site (A3). The reconstructed fort includes the barracks, jail, church and more. Take in spectacular river views and gain insight to the French occupation through guided tours, exhibits, films, and knowledgeable costumed-interpreters. Kids of all ages will love the re-enactments and musket demonstrations as well as special events such as carpentry workshops, storytelling, and bread-making in a replica 18th century oven. There is a small entrance fee. Free for seniors and those under 12.

Sitting atop an 80-foot bluff, the J. Bennett Johnston Waterway Grand Ecore Visitor Center (I1) overlooks the Red River and features exhibits on the history of the waterway, its preservation and importance to transportation and recreation. You’ll also learn about the Native Americans that lived here, view a dinosaur skull and rock samples. A short trail leads to Civil War entrenchments and stunning views. Admission is free.

From Nachitoches, consider a few side trips before continuing the Heritage Trail such as to Briarwood: Caroline Dormon Nature Preserve (H3), named for Caroline Dormon, the first woman employed by the U.S. forestry industry. Author of several books on the native plants of Louisiana, she was instrumental in persuading state leaders and the U.S. Forest Service to establish the Kisatchie National Forest. Explore extraordinary tree-lined paths, cypress bogs, frog ponds and more than 7,000 species of plants. The preserve is open to the public for guided tours every weekend in April, May, August, and November. There is a small entrance fee. The Kisatchie National Forest is comprised of more than 604,000 acres spread across seven parishes Louisiana, and is divided into five Ranger Districts. Briarwood falls within the Winn Ranger District.

If you want to delve further into frontier camp life, detour to the Fort Jesup State Historic Site (A1) approximately 22 miles west on LA-6. The historic kitchen is the only remaining authentic structure of the 82 originally built, but others such as the mess hall, officers’ quarters have been reconstructed. Enjoy the museum exhibits, maps, artifacts, furniture, tools and educational programs such as open hearth cooking and black powder demonstrations. Bring a picnic and relax beside the ponds. There is an admission fee.

While here, consider another detour to Rebel State Historic Site and Louisiana Country Music Museum (M1) featuring memorabilia from the early days of county, gospel, the radio era to modern day. Peruse musical instruments, household objects, Johnny Horton’s gold record for “Battle of New Orleans”, Hank William Jr.’s shirt and more. The grounds feature a picnic area and two short nature trails. Check out the schedule for live performances of both local and national artists, and the popular annual fiddling championship. The historic site dates back to the Civil War, when a Confederate soldier was killed, then buried here. A marker now stands in honor of the Unknown Confederate Soldier. There is a small entrance fee. Free for seniors and kids 12 and under.

Continue on LA-119 through the Cane River National Heritage Area. Many plantations dot the landscape, but only three are regularly open to the public. The others are privately owned.

Leafy giant oak trees stand proud in Cane River Creole National Historical Park (A6). The Park was established to protect and preserve the Oakland Plantation and outbuildings of the Magnolia Plantation. The Oakland Plantation (A7) once produced rice, sugarcane, tobacco and cotton for sale as well as vegetables and livestock to support the many people that lived here. Seventeen historic buildings remain such as the Doctor’s House, Slave-Quarters, Pigeonnier, Carpentry Shop. Don’t miss the ranger-led tour of the Slave/Tenant Quarters every day at 12:30 p.m. and a tour of the Main House at 1:00 p.m. Each structure has a phone number to access the Audio Self Tour. The park is free to enter. Note, the Magnolia Plantation is at the end of this drive. Along the way, you will find fresh pecans, and of course pecan candy, pecan pie, pralines, and more for sale.

The Melrose Plantation (A8) is the legacy of freed slave Marie Therese Coincoin and her family. Growing tobacco and raising cattle, they became a leading and wealthy family of free people of color. Explore nine buildings including the Big House, the African House, the Yucca House and Weaving House. It is also where world-renowned African American folk artist Clementine Hunter began painting. Working on the plantation picking cotton and as a cook, she found discarded tubes of paint, and decided she could tell her stories by “marking pictures”. Her brightly colored exuberant paintings are a snapshot of plantation life and many are on view. There is a guided tour well worth the entrance fee, many of the knowledgeable guides are descendants of slaves that once lived here.

Founded in 1803, Saint Augustine Catholic Church (A9) was the first Roman Catholic Church established by and for people of color in the U.S. The church was the location of the wedding scene in the movie Steel Magnolias. There are other many homes, businesses and locations in Natchitoches featured in the movie and you’ll find various operators offering guided tours of the sites.

The Magnolia Plantation Complex (A10) was built on land acquired by the LeCompte/Hertzog family in 1735 and the main house and fields continue to be owned and operated by the Hertzog family. Take a self-guided tour to observe early farm equipment such as cotton picker tractors, and to visit 18 buildings including the blacksmith shop, gin barn and slaves’ quarters. Some claim that the plantation is haunted by the slaves that were forced to live and work here. The main house is privately owned and not open for tours.

Our drive officially ends in Cloutierville but if time allows, don’t miss a drive through the unique rugged landscape of the Longleaf Trail Scenic Byway.