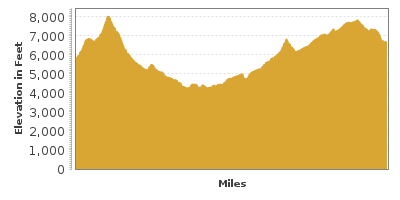 The Geronimo Trail honors the great Apache Warrior, Geronimo, who was born west of here in today’s Gila Wilderness. Our drive begins in San Lorenzo at the intersection of the Scenic New Mexico 152 and NM-61, a perfect extension to the Trail of the Mountain Spirits.

Heading east on NM-152, the highway climbs and winds its way into the Black Range Mountains, with its vast pine forest, interesting volcanic rock formations and 360 degree majestic views. Look behind you to see the Kneeling Nun rock monolith that resembles a human kneeling and the grandeur of the Santa Rita Mine.

The road twist and turns, climbing 3,000 feet in elevation. Hair-pin curves require careful driving on this road often used to test handling by automobile manufacturers. Stop at Emory Pass Vista (V2) for breathtaking views of the rugged Rio Grande Valley and Caballo Mountains to the east.

The town of Kingston and neighboring Hillsboro grew overnight when silver and gold were found in the Black Range. Kingston was founded in 1882 and its time was home to 7,000 miners, the largest population in New Mexico. Now it is a gateway to recreation in the Gila National Forest, and features a museum and gallery in the original Percha Bank. In the quiet community of Hillsboro founded in 1877, you can view the remnants of the courthouse, the jail and learn more about the fascinating history of the region at the Black Range Museum (M1). The museum is housed in the Ocean Grove Hotel, once owned by famed Madame Sadie Orchard, and features 19th- and 20th-century household, mining, and farming objects.

At the end of NM-152, the road joins the Rio Grande and the US-25. Head north on US-25, but consider a stop at Caballo Lake State Park (W1). Enjoy the majestic Caballo Mountains to the east, two spectacular cactus gardens and the picturesque Caballo Lake which offers a wide array of recreation including swimming, jet skiing, boating, fishing, hiking and camping. The park is also well-known for Bald and Golden Eagles that migrate through.

Nearby Percha Dam State Park (W3) is a little quieter. Excellent for fishing and bird watching, the park is one of the top five birding sites in New Mexico. Partake in the variety of recreational opportunities such as, camping, swimming and hikes along the river. In spring join the Migration Sensation, a celebration of birds.

Following the Rio Grande, the fourth longest river in the United States, the US-25 continues north towards the town of Truth or Consequences. Previously known as Hot Springs, the town changed its name in 1950 when radio announcer Ralph Edwards proclaimed that his new show would air from the town that named itself after the show, Truth or Consequences. The first episodes were recorded in May, and since then, the town celebrates “fiesta” weekend the first weekend each May.

In Truth or Consequences, the hot springs district comprises the entire downtown area. Geo-thermally heated between 95-112 degrees, the springs are rejuvenating. Note that all the hot springs in Truth or Consequences are commercial establishments. Legend states that the hot springs were neutral and sacred ground for all Native American tribes. You can learn more about local legends and the history of Sierra County, New Mexico at the Geronimo Springs Museum (M2). Explore exhibits featuring mammoth and mastodon fossils, Mimbres pottery, the Apache and their leader, Geronimo and more. Next door to the museum is the Geronimo Trail Scenic Byway Visitor’s Center. Turtleback Mountain overlooks the city and is a popular hiking destination.

Stop at Elephant Butte Lake State Park (W2), New Mexico’s largest and most popular lake. Surprisingly, it is not named for the stegomastodon skeletons, an ancient elephant relative found in this area, but for the shape of an island within the lake. The island is the eroded core of an ancient volcano. The park has year-round camping, bird watching, swimming, boating, fishing, and hiking.

After passing Truth and Consequences, take exit 83 for US-85 North, keeping to the left after the exit. A few moments after passing under the freeway, turn left onto NM-52. The road again begins to climb into the Black Range.

In 27 miles, you arrive in the town of Winston, where you should take a side-trip to the town of Chloride (T1). A near ghost town, Chloride’s heyday began in 1879 and is named after the chloride of silver. The town features the Pioneer Store Museum (M3) showcasing original buildings. To reach it, from Winston, turn south onto Republic Road, continue onto Country Road 06, and in a mile, turn right onto Wall Street for another mile.

Back on NM-52, turn onto NM-59 in 10 miles and the road enters Gila National Forest and crosses the Continental Divide. Though our scenic drive comes to an end when you arrive in Beaverhead, enjoy the views of Hillsboro Peak and Sawyer’s Peak and the pristine valley. From here, Albuquerque is 4 hours away by backtracking back to US-25 and heading north.