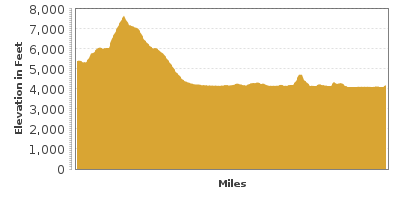 The Pacific Northwest has a volcanic, fiery history, through which the Volcanic Legacy Scenic Byway travels from Diamond Lake and Crater Lake down towards the Oregon-California border, continuing through the Lassen Volcanic National Park and the Lava Beds National Monument. 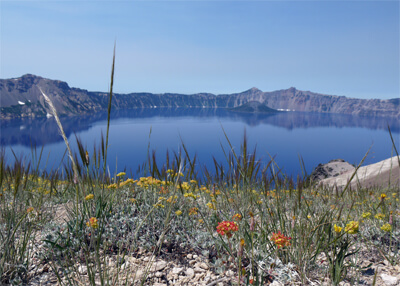 Heading south on Crater Lake Highway, you will reach the Crater Lake National Park. Crater Lake and the Pumice Desert were formed over 7,000 years ago when Mount Mazama was destroyed during a massive eruption. Crater Lake is the deepest lake in the United States and its pristine blue waters are glorious for swimming, scuba diving or for a boat tour of the former volcano. Access to the water and tours are only accessible by a 2.2-mile round trip strenuous hiking trail, which due to extreme snowfalls are only open from June to October. It’s best to check for current conditions beforehand.

Surrounding the lake is the renowned 33-mile Rim Drive. Many observation points, turnouts and interpretive signs offer opportunities to stop and take in the incredible scenery and learn the geologic history of the area. Off of Rim Drive are several trails to explore, including the half-mile Castle Crest Wildflower Garden Trail through a forest to a wetland wildflower-filled meadow which peaks in July and August. Crater Lake National Park also hosts thirty-three miles of The Pacific Crest Trail which stretches from the Mexican to Canadian borders, offering hikers magnificent views of the mountains surrounding the lake and a chance to spot some of the many mammals from the little brown bat to the Roosevelt elk, birds, amphibians and reptiles.

As you reach the end of the Crater Lake Highway, the road will join OR-62; to rejoin I-5, you can turn right on OR-62, but for this drive, turn left on OR-62. The drive continues through farmlands and will reach the town of Fort Klamath in 15 miles, where the guardhouse is now the Fort Klamath Museum (M1).

Moments after the Fort Klamath downtown, OR-62 will turn to the left, however, for this scenic drive, continue straight on Weed Road East. In 2 miles, turn right onto Sevenmile Road which will become West Side Road.

In 10 miles, you will arrive at the Upper Klamath National Wildlife Refuge (H1). This refuge is home to several hundred species of birds, including raptors and white pelicans, and during the winter, it is home to one of the largest gathering of bald eagles in the continental United States. Exploring is best done from a boat which are available for rent.

The West Side Road will end as it joins onto OR-140, where you should turn left. Continuing on this OR-140 for 26 miles will bring you to the town of Klamath Falls, where the Favell Museum (M2) has an exquisite collection of Native American and Western art and artifacts. Klamath Falls is also the start of the 100-mile OC&E Woods Line State Trail (H2). The trail heads east and is built on a former railroad line. From Klamath Falls Trailhead to the small, rural community of Olene is 8 miles of paved trail where you can bike, jog, skate, and ride horseback. The rugged unpaved section crosses through a mix of forest, ranch lands, rivers and forested buttes. All the original trestles are still in place.

From Klamath Falls, the OR-140 intersects with the US-97. This drive will head south on US-97 towards California. After Klamath Falls, the scenic drive enters the Lower Klamath National Wildlife Refuge, the first such National Park in the United States, established by President Theodore Roosevelt in 1908. This 46,900-acre waterfowl refuge is a mix of shallow freshwater marshes, open water, grassy uplands, and croplands. A marked 10-mile auto tour allows visitors year round access to great wildlife viewing opportunities. The Refuge also has a number of photo blinds which are strategically situated for great early-morning photography.

This drive ends as you approach California. Once in California, you can continue on US-97 for 55 miles where it will join onto I-5, or head east on CA-161 until it intersects with OR-139 and head south to enjoy the Lava Beds National Monument via our Mount Shasta Cascade Loop.