Mouth of the Delaware to Brandywine

The Blend of Nature and Art 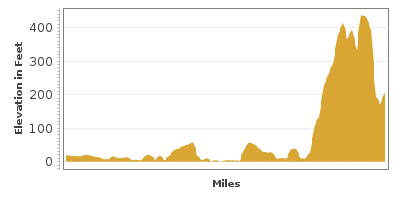 Stunning natural scenery of rolling hills and valleys, formal gardens, romance and history await along this scenic drive from Dover, Delaware to Chadds Ford, Pennsylvania. This land of Du Pont fame is steeped in opulence, innovation and discovery. Wildlife refuges abound along the route, creating a unique network of land and water — home to a vast array of birds and wildlife. 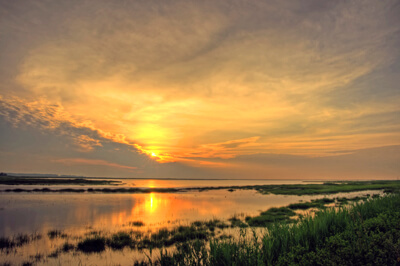 To reach the start of the drive, head east on East Division Street, which becomes North Little Creek Road and DE-8 after passing DE-1. Before leaving Dover, consider a visit to one of the many museums including the John Dickinson Plantation (A4), home of John Dickinson, one of the founding fathers of the United States, signer of the Constitution, and “Penman of the Revolution.” Re-enactments with costumed interpreters examine the era and its people, from the wealthy Dickinson family, poor whites, slaves and free blacks during the 1700s and early 1800s. The Plantation itself is located southeast of the Dover Air Force Base on Kitts Hummock Road (County Road 68). The Johnson Victrola Museum (M5) pays homage to Delaware’s native son, Eldridge Reeves Johnson, who founded the Victor Talking Machine Company in 1901. Learn about the company’s contribution to early radio days, sound recording, listen to music on original Victor machines, and delight in the Nipper collectibles, the iconic fox/bull terrier who became the corporate symbol. Visit the restored Old State House (A5) built in 1791, one of the oldest state-house buildings in the U.S. All of these museums are free, donations appreciated.

Driving east on DE-8 for 4 miles, turn left to head north on DE-9. In a few miles, you will arrive at the Bombay Hook National Wildlife Refuge (T1). Explore via the 12-mile Auto Tour which begins on Dutch Neck Road. Each numbered stop is explained on a brochure that you can pick up at the entrance or Visitor Center. Observe diverse habitats, such as woodland forest home to white-tailed-deer, opossum, fox as well as tidal salt marsh host to more than 100,000 migrating greater snow geese. Get a closer look on one or more of the five walking trails, two of which are handicapped accessible. Behold beaver, muskrat, blue herons, bald eagles ducks and more at Finis Pool. There is an entrance fee covered by the America the Beautiful National Parks Pass.

In a few miles, you arrive at the Woodland Beach Wildlife Area (A1) which protects coastal prairie and tidal marsh for resident and migratory birds. A 3-mile road traverses the peaceful refuge. There are boardwalks and an observation tower, perfect for photography and wildlife viewing. Note that the refuges are open to public hunting, so please wear blaze orange — or avoid these areas during hunting season.

Following the signs for DE-9, cross the bridge over the Chesapeake and Delaware Canal, which connects Chesapeake Bay with the Delaware River. Visit Fort DuPont State Park (H1) for stellar views, picnicking and hiking. The 1.1-mile River Trail explores the regions historic military past and natural beauty, or stroll the easy Port Penn Trail which travels through the Augustine Wildlife Area.

Get on the Delaware River with a side trip to Fort Delaware State Park (H2). The civil war fortress on Pea Patch Island can be reached by a half-mile ferry ride from Delaware City. Costumed interpreters launch you back to 1864, where you can examine the lives of Union soldiers, Confederate prisoners, and civilians. Do some hands-on blacksmithing, watch an infantry drill, visit the laundry, hospital, and so much more.

Back on DE-9, in 10 miles, you arrive in the town of New Castle, the original capital of the Delaware Colony. Rich in history, the town offers much to discover. Visit the New Castle Courthouse Museum (M1). Built in 1732, this building was the first court and state capitol. Artifacts, exhibits, furniture, and art tell the story of early Native Americans, the history of Delaware’s court and Assembly, the Underground Railroad, and more. New Castle is also thriving in agri-tourism. Farm tours offer a seasonal taste of the region with fresh produce, berry, apple and pumpkin picking, and hay rides.

Continuing on DE-9 north, you will soon arrive in the town of Port Penn, named for William Penn, founder of the Pennsylvania Colony in 1681. At the Port Penn Interpretive Center (I1), learn about the area’s natural history and folk life of the historic wetland communities, participate in one of the educational programs or take a self-guided walking tour featuring historic homes of Port Penn and nearby marshlands.

Continue north on DE-9 until you reach the town of Wilmington, which begins the exploration of the Brandywine region. Learn more about the Du Pont family and the history of American 19th-century industrialization at the Hagley Museum and Library (M2). The museum itself is a series of buildings built in the 1880s over 235 acres. Explore the estate home to five generations of Du Ponts and the original Du Pont Company mills which manufactured gunpowder between 1802 and 1921. Visit the Steam Engine House, Machine Shop, Quarry, and the homes of gunpowder workers and their families. From past to present, the DuPont Science and Discovery exhibit examines the company’s innovative products such as elements in a space suit, race cars and fire proof protection. There is an admission fee.

Don’t miss the Nemours Mansion and Garden (A2). The glorious 102-room mansion built in 1910 by Pierre Du Pont for his second wife and was designed in the late 18th-century French style. Lavish rooms are embellished with 17th-century furniture, accessories and art. Explore the bowling alley, billiard room and garage compete with antique cars. Lush formal gardens include sculpture, ornate fountains and bridges. There is an admission fee which includes a guided tour. Advance reservations are highly recommended. The Mansion is open from May to December and is closed on Monday.

Historic Wilmington is also a vibrant and modern city, featuring a ballet, theater and opera. The Delaware Art Museum (M6) boasts a grand collection of British Pre-Raphaelite art, works by Wilmington-native Howard Pyle, American art from 19th century to present including masterpieces by Winslow Homer, Edward Hopper, and Dale Chihuly. There is a fee to enter. Delaware shopping, dining, and entertainment are all tax-free.

The nearby Mt. Cuba Center (A6) is the former home of Mr. and Mrs. Lammot Du Pont Copeland. Their passion for gardening is evident in the expansive gardens including one of region’s finest woodland wildflower gardens. Almost 600 acres, the garden can only be visited by taking a two-hour guided tour. Advance reservations are required and there is an entrance fee.

From Wilmington, head north on DE-52 where you will soon arrive at the Winterthur Museum, Garden and Library (M3). Once the home of Henry Francis Du Pont, meander through 175-rooms dripping with luxury. The art galleries feature over 90,000 pieces of American decorative art from the 1640s to 1860, including furniture, ceramics, metalwork, textiles, painting and prints. Don’t miss the elegant Campbell Collection of Soup Tureens dating from 1720 to today. The 60-acre garden encompasses rolling hills, streams, meadow and forest and is incredible in every season. Marvel at the Enchanted Woods, stroll the Sundial Garden, Azalea Woods and more. General admission tickets are honored for two consecutive days and include access to the garden, a garden tram tour, the Galleries, special exhibitions and introductory house tour.

Continuing north on DE-52, you soon arrive at the junction for US-1. Here, don’t miss a side-trip to the Longwood Gardens (A3) by heading west on US-1. The Longwood Gardens were created by Pierre S. Du Pont and are highly praised as one of the world’s greatest gardens. More than 11,000 plant species, 20 outdoor gardens, a 4-acre indoor conservatory, tree houses, fountains and more create an inspiring, dazzling, horticultural wonder. There is a fee to enter and touring here can easily take a whole day. Dine at The Terrace — a certified green restaurant and shop in the Garden Store.

Heading east on US-1, is the Brandywine River Museum (M4). Situated in a restored 19th-century grist mill, marvel at an unparalleled collection of three generations of the Wyeth Family (N.C. Andrew and Jamie). Tour N.C. Wyeth’s home and studio, Andrew Wyeth’s studio, Kuerner Farm and the work of over 300 American artists and illustrators with emphasis on the art of the Brandywine region.

Our scenic drive comes to an end at the Brandywine Battlefield State Park (H3), where in September 1777, the British Army defeated the American army and later took Philadelphia. At the Visitors Center, see a short film, exhibits of uniforms and weaponry, then explore the battlefield by retracing the steps of Washington’s and Howe’s troops in three interpretive driving tours. Each of the informative tours can take between one and two hours. September features a re-enactment of the battle with authentic dress and Revolutionary War muskets.

Note that Delaware State Parks charge an entrance fee from March 1 to November 30.