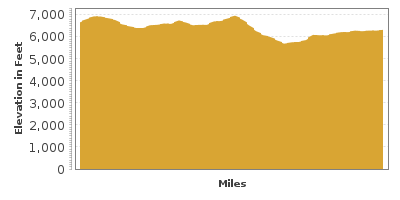 The Turquoise Trail is a spectacular scenic route from Albuquerque to Santa Fe. Named for the rich turquoise deposits found in the area, this drive truly captures the essence of our mission — to get off the highway and explore breathtaking views of dessert, canyons, mountains, quaint towns, recreation and history. 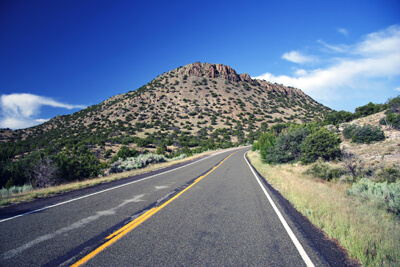 Heading towards Madrid on the Turquoise Trail.

This scenic drive begins in the town of Tijeras which can be reached off exit 175 off I-40, about 22 minutes from downtown Albuquerque. Before leaving the town, stop at the Sandia Ranger District (I1) for hiking information and a visit to the Tijeras Pueblo Archaeological Site (A1). A 200-room adobe structure formed in 1313 AD once housed 400 people. Today, the pueblo is a grass-covered mound, rich in history.

The drive heads north on NM-14, through a ponderosa pine forest alongside the Sandia Mountains, formed by the same forces that created the Rio Grande. Visit the Museum of Archaeology and Material Culture (M4) to explore the history of the region and its inhabitants.

After Cedar Crest, consider a side-trip up the Sandia Crest National Scenic Byway (T1) on NM-536. Climbing several switchbacks and through five life zones to the 10,678-foot Sandia Crest, you will be rewarded with spectacular views of Albuquerque, the Rio Grande, Mount Taylor, and the Jemez and Sangre de Cristo Mountains. Explore the Cibola National Forest along one of the many trails, including the popular half-mile loop Peak Nature Trail. The area is replete with a full array of outdoor activities. Before starting out, don’t miss the Tinkertown Museum (M1). Ross Ward’s quirky collection of hand-carved animated wooden miniatures delight, housed in a 22-room museum surrounded by a wall made from over 50,000 glass bottles. Old-fashioned storefronts and wacky western memorabilia and eccentric collections round out the adventure.

About half way up the Sandia Crest National Scenic Byway, consider a side trip on the gravel Country Road 165, heading through Las Hurtas Canyon to the Sandia Cave trailhead where excavations have found evidence of humans in this area some 12,000 years ago. A short trail leads to the trail to the cave and a metal spiral staircase leads to the entrance. Visitors should bring the usual caving equipment, head protection, flashlights and appropriate clothes and shoes.

Back on NM-14, the road twists through the desert where piñon pine and juniper trees struggle to survive. The town of Golden was the site of the first gold rush in 1825. Water shortage made mining attempts difficult and eventually the gold dwindled, as did the much population of the town.

Some 11-miles north brings you to the coal-mining town of Madrid. In the 1800’s, peak production of more than 250,000 tons of coal was extracted per year. When coal use declined Golden became a ghost town. In 1970’s the town was rejuvenated by artists and craftsman and today there are many art galleries, summer theater and boutiques. Learn about the coal history at the Old Coal Mine Museum (M2). Open April to October 15, the museum features an antique steam engine, old mining equipment and more.

Shortly after Madrid, you arrive in the town of Los Cerrillos, the oldest mining area in New Mexico and possibly the United States. Sometime in the 1400s, Native Americans dug a 130-foot deep tunnel to extract turquoise from Mount Chalchihuitl for jewelry and pottery making. When Cortez invaded in the 1500s, many jewels were sent back to Spain. Very few of these mines are active, and some have been the setting for Hollywood movies. Visit the Cerrillos Turquoise Mining Museum and Petting Zoo (M3) and the Cerrillos Hills State Park (H1) which has 5.2 miles of hiking and biking trails.

The scenic drive then climbs through the sandstone hills and up the grasslands until it ends in Santa Fe. From here, consider heading north on I-25 to the High Road to Taos.