From Canyons to High Plains to Canyons 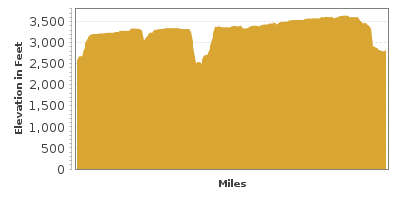 The span from Caprock Canyons State Park to Palo Duro Canyon State Park offers sweeping canyons views and the distinctive geology of the classic High Plains and Rolling Plains of the Texas Panhandle. 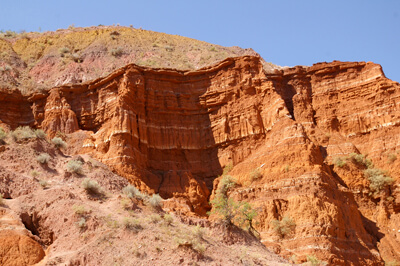 This scenic drive begins in the town of Quitaque (KITTY-kway) and heads northwest towards Canyon. You can reach Quitaque by driving east on TX-86 from Turkey or west from Silverton (which this scenic drive will soon travel through). Although this drive does not travel through Caprock Canyons State Park (H1), consider a side trip exploring its wonders by heading north on Farm Road 1065.

Caprock Canyons State Park is a step back in time. Dramatic red rock cliffs rise over 1,000 feet. Below, Red River, the longest river in North America that doesn’t originate from the mountains, snakes its way through the canyon, continuously carving. About a mile after entering the park is the information center with interpretative exhibits.

The Caprock area is a 10 million year old Ogallala Aquifer, a vast, shallow underground water table consisting of caliche, conglomerate, sandstone and siltstone. It is well known for groundwater reservoirs, though there is recent concern that water is being used faster than it is replenished.

One of the park’s major attractions is the Caprock Canyons State Park Trailway. A former railroad originally built in the 1920s and abandoned in the 1980s, is now 64-miles of incredible trail. Over 40 bridges, trestles and tunnels make the drive a historical wonder and lined with the stunning beauty of redrock cliffs making this one of Texas’s best bike trails. The trail is also open to walkers, hikers and horseback riding. Take advantage of the Park’s shuttle.

Caprock Canyons State Park is home to the descendants of the last free range Southern Plains Bison which were hunted to near extinction in 1878. The bison roam freely throughout the park. Among the Park’s many amenities are swimming, boating, camping and the Clarity Tunnel Bat and Trailway Tours.

Back on the road in Quitaque, head west on TX-86. After crossing the edge of the Caprock, the land becomes remarkably flat for miles and miles. Formed by sedimentary deposits eroded from the Rocky Mountains to the west, this is the southern-most section of the Great Plains and prior to pioneers, the area was a grassland filled with grazing bison.

Along TX-86, you will see a few playa lakes dotting the side of the road which are popular migratory bird and wildlife stops. There were several more lakes in this area, however, plowing caused leaks in the clay seals at the bottom of the lakes that helped them retain water.

After passing the town of Silverton, the Texas Panhandle’s commercial center for local ranchers, turn right onto TX-207 where in about 10 miles, the road descends into the colorful Tule Canyon, carved by Tule Creek which you will cross. Consider a stop at MacKenzie Reservoir (W1) where you can enjoy a picnic and hike, boating, or fish for a variety basses, catfish and bullheads. Camping is also available.

The road travels by a few ranches until you approach Palo Duro Canyon, the Red River’s largest canyon and at 120-miles long, 9-miles wide, 850 feet deep, the second largest canyon in North America. Gaze down the canyon walls to observe five geologic periods which Francisco Coronado referred to as the “Spanish skirts” of red sandstone and white gypsum. Take advantage of the scenic overlooks and picture-perfect images of vast expanses topped by crisp blue skies.

After crossing the Prairie Dog Town Fork of the Red River, stop at the scenic overlook for more spectacular views of the canyon. From here, the road begins to climb out of the canyon until you reach the plains, and ranches border the road.

If you were to head north on TX-207, you would eventually meet the Canadian River which is surrounded by one of the world’s largest gas fields, but for this scenic drive, as you approach the town of Claude and US-287, turn left onto Farm Road 1151 and continue past more ranches for 29-miles. At the intersection with Farm Road 1541, turn left and continue south for another few miles where you will join TX-217. Heading west will bring you to the town of Canyon, but for this road trip, head east for Palo Duro Canyon State Park (H2).

After several more ranches, you will begin to see Caprock in the distance. At the end of TX-217 is the entrance to Palo Duro Canyon State Park. In two miles, stop at the overlook where you will be overwhelmed by the impressive view from the canyon’s rim. Note the junipers struggling to survive on the rocky cliffs. The park is named for their struggle, Palo Duro, meaning “Hard Wood” in Spanish. The trickle of the Prairie Dog Town Fork of the Red River below may seem an unlikely force to create such a grand canyon, however, past flooding and great rains contributed to the erosion. Learn more in the Visitor Center which also features a Museum.

Much time can be spent in the splendor of the “Grand Canyon of Texas”. There are hikes for all levels including ranger-led Family Nature Hikes and Bird Walks. The park is also popular with mountain bikers and horseback riding where guided tours are also offered.

Palo Duro Canyon was once nominated for National Park status, however, having failed this, Texas State Parks acquired the property and it is now one of the most visited State Parks.

Layers of geologic history are evident in the red rock and gypsum from 250 million years ago when this area was an ocean floor. As early as 12,000 years ago, humans are known to have hunted and migrated in and out of the area. In the 1700’s, humans have called this area home and have resided here since.

From the overlook, the road begins its descent to the canyon’s floor. Here you will find an outdoor amphitheater where a musical drama is performed with dinner packages daily except for Sunday, a number of picnic and camping areas, and the Prairie Dog Town Fork of the Red River.

Visit a replica of Charles Goodnight’s dugout which he built as a temporary living space while he “gathered” cattle after the Civil War. Or explore the V. S. Arnold oil well site, built in 1919 but never found oil.

From here, the road continues in a loop where many good picnic spots, hikes, and camping sites are located as well as the Park’s most famous rock formation, The Lighthouse. Look for the parking area and trailhead on the right. A 3-mile moderate one way trail leads to the incredible 75-foot tall pinnacle.

Retracing your way back to the park’s entrance, continue west on TX -217 to Canyon, where you can visit Panhandle Plains Historical Museum (M1). Panhandle-Plains Historical Museum is located on the campus of West Texas State University and has exhibits pertaining to both history and prehistory of this area, featuring Texas and Southwest American Indian art, and the paleontology, geology and archaeology of the area. Or visit the Buffalo Lake National Wildlife Refuge (W2). The 7,664 acres of short grass prairie, riparian, marsh and woodland create optimal habitats for migrating waterfowl, such as warblers, tanagers, flycatchers and wildlife such as mule deer, prairie dogs, bobcats and more. Drive slowly on the auto tour road, or explore via one of the many walking trails.