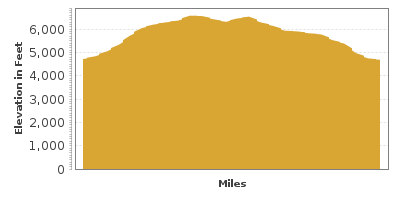 The Colorado National Monument is located at the northern edge of the Uncompahgre Plateau. Sitting more than 2,000 feet above the Colorado River, the Plateau rose once, completely eroded, and rose again over the last 2 billion years. Made of sandstone, the Plateau spans from here all the way to Telluride. 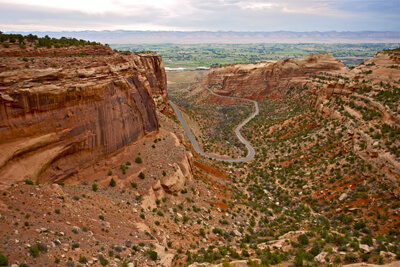 Once on Monument Road, you enter the spectacular Colorado National Monument via its East Entrance. A fee is required that is covered by the America the Beautiful Annual Pass. Rim Rock Drive snakes its way through semi-desert terrain dotted with piñon pine and juniper and a variety of animals including mule deer, grey fox and Hopi chipmunk. Soaring above the towering canyons are golden eagles and red-tailed hawks, and sunbathing on the rocks look for reptiles such as the carnivorous yellow-headed collared lizard or the plateau striped whiptail.

From the Monument’s entrance, the road follows a series of switchbacks, passing through glorious pinnacles of sedimentary rock, tunnels, sculpted red rock monoliths and unparalleled views under vast blue skies. Use caution while driving and watch out for bicyclists, fallen rocks and wildlife.

Enjoy the view at Devils Kitchen Picnic Area. Devil’s Kitchen is a natural opening formed by a circle of upright boulders. This incredible and refreshingly shaded area can be accessed by a 1.5-mile round trip hike on Devil’s Kitchen Trail. Two other trails leave from here as well, No Thoroughfare Canyon Trail and Old Gordon Trail. Serpents Trail is across the road. Petroglyphs can be spotted on these trails.

Arriving at the top of the Uncompahgre Plateau, stop at Cold Shivers Point (V1) which overlooks the precipitous Columbus Canyon and the Grand Valley. The canyon floor is over 1.5-billion years old and was once an ocean floor. The landscape evolved, becoming marshland and swamp when dinosaurs ruled, creating an ideal environment for the many fossils found here, including the first known skeleton of the Brachiosaurus.

Heading north, you will pass the Liberty Cap Trail (H3), a 7-mile trail that heads to the Ute Canyon’s floor and to the east part of the Colorado National Monument where you will enjoy piñon and sagebrush valleys. Continuing the drive you arrive at Highland Overlook (V6) for views of Grand Valley to the Book Cliffs badlands along the Colorado River.

Next stop is Artists Point (V7) where canyon walls and mesas create exquisite vistas. Nearby is the trailhead for Coke Ovens Trail (H2). The one-mile round trip trail leads to interesting rock formations, including the trails namesake, domed-columns of red stone that rise few hundred feet high.

Monument Canyon Overlook (V8) offers another spectacular view of the valley and the Coke Ovens. Monument Canyon Trail is a popular 6.3-mile one way hike 600-feet down to the canyon floor. Those adventurous enough to hike this trail will be rewarded with stunning rock formations such as Kissing Couple, and the 450-foot tall monolith Independence Monument. Spectators gather on July 4th as climbers re-enact a tradition begun in 1911 by John Otto — to raise the American flag at the summit.

The best overlook within the Colorado National Monument lies just ahead. The aptly named Grand View Overlook (V9) showcases mounds of twisted red rock and elements from the original plateau still visible today. These red rock sandstone pinnacles capped with Kayenta Sandstone were formed after ice and water eroded and separated them from the cliffs, forming the spectacular 400+ foot monoliths that we see today.

Just after Independence Monument View pullout, is the trailhead for Otto’s Trail. Named for John Otto who explored this area in 1906 and fell so deeply in love with the canyons, he decided to live here and devote himself to building trails and encouraged the government to create the Colorado National Monument. In 1911, he got his wish and earned a $1.00 per month salary as the park’s first custodian. The .75-mile round trip trail leads to an overlook above Wedding Canyon where you can gaze upon Independence Monument, Praying Hands, Sentinel Spire and the Pipe Organs.

Continuing north, you will arrive at the Colorado National Monument Visitor Center (I1), where you can learn about the unique geology that surrounds the monument. From here, enjoy a picnic or hike through piñon pine forests on Alcove trail or head to the rim along the .75-mile round trip Window Rock trail, overlooking Window Rock. Be aware of the steep cliffs, especially if children are present. If you decide to spend the night, camping is available at Saddlehorn Campground on a first-come first-served basis.

From the visitor center, the road descends the plateau towards the Colorado River, passing several overlooks including Fruita Canyon View and Balanced Rock View featuring an amazing, precariously balanced rock, and through two tunnels, more outstanding views before this drive ends in the town of Fruita.

From here, consider heading east on CO-340 towards Grand Junction where you can head south on CO-141 towards the Unaweep-Tebeguache Scenic Byway which continues the exploration of the Uncompahgre Plateau or head west on I-70 towards the Grand Mesa.