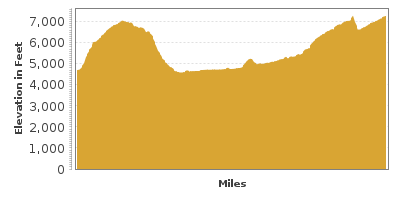 The Unaweep-Tebeguache Scenic Byway travels through an array of plateaus and mesas as it winds its way through Unaweep Canyon on its way to the heart of the Uncompahgre Plateau. The unique, red rock formation is one of the state’s most fascinating landforms and follows the drive from the start, continuing past the end of this scenic drive. Make sure you have a full tank of gas, food and water as service areas are far apart. 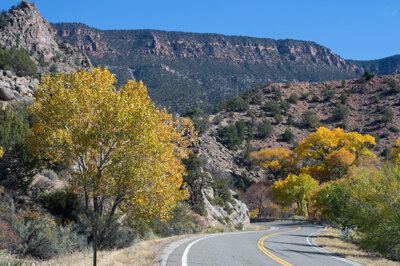 Unaweep Canyon near the town of Gateway.

The scenic drive begins in the town of Whitewater, about 9 miles south of Grand Junction and a few miles from I-70’s exit 26 or 36. Heading west on CO-141 and then south on CO-145, the scenic drive ends in Placerville. Like many of our drives, this can be done in either direction.

Heading west on CO-141, you will cross the Gunnison River and see the Uncompahgre Plateau in the distance. The Ute Native Americans called the Uncompahgre Plateau, Tabeguache, which means “where the snow melts first.” Enjoy the wondrous beauty of 2 billion years of history embedded in the rock layers, like the pages of a book revealing the animals, plants, seas and temperature of the past.

Continuing west, you enter Unaweep Canyon, noted by its dry canyon floor. Most geologists believe that the canyon was carved by the Gunnison River when the plateau first rose, until it was diverted to its present course, others believe that it may have been a fault line or glacier-carved due to its U-shape.

Eight miles into the drive, stop at the Grand Valley Overlook for sweeping views of the canyon, Colorado River’s Grand Valley, the Bookcliff mountain range and its largest peak, Mount Garfield at 6765 feet, and finally to the world’s largest flat-topped mountain, Grand Mesa to the east. Consider a side-trip on a dirt road about a mile up ahead on your left that leads into Cactus Park and to the Gunnison Gravel Natural Research Area which protects ancient river deposits that prove the Gunnison River flowed here in prehistoric times. Here you will also find fishing, wildlife viewing and hiking.

Continuing west on CO-141, you pass a few abandoned towns once thriving when copper, silver, and gold were found in these hills. In 6-miles from the overlook, turn left onto Divide Road (T1). The 2-mile side trip on a dirt road allows you to observe one of the most interesting geologic symbols of Unaweep Canyon, the Great Unconformity. An unconformity occurs when there is a gap in the continuous record of geologic activity — usually by extensive erosion of rock or even no rock layer at all. The missing pages of history. The Uncompahgre Plateau rose once and completely eroded over the course of 2.2 billion years, then rose again to its current 10,000 foot magnificence. The gap is visible where you will see a line between the granite (some of Colorado’s oldest exposed rocks) and the newer red sandstone. This particular one is “Great” due to the extreme gap of 1.2 billion years representing a quarter of the Earth’s history.

If you enjoy backcountry driving, this road continues for about a hundred miles, ending at CO-90, where you can head west towards Naturita or east towards Montrose. Looking for a primitive campground? Continue on Divide Road to the BLM’s Dominguez Campground. This large and pristine terrain is home to a wide variety of wildlife including black bear, mountain lion, elk and golden eagles.

Back on CO-141, you arrive at Unaweep Divide and along with fabulous views is a rare geological feature. Two creeks, East Creek and West Creek, flow in opposite directions off a 7,000-foot mound. The only canyon in the world that does this, the Ute named the canyon Unaweep, meaning “canyon with two mouths.” The creeks are also a riparian habitat where you can observe songbirds, trout and aquatic insects.

Shortly afterwards, amidst the red rock cliffs, 1200-foot granite walls and high desert terrain, you will see the ruins of Driggs Mansion (V2). Nestled at the base of Thimble Rock, the Italian farm-style home was built between 1914 and 1918 for Colonel Lawrence La Tourette Driggs, a lawyer from New York. Using stones from nearby Mayflower Canyon, it was one of the only stone homes in this area when completed. Some of the original architecture and materials are still visible.

Continuing west, the canyon walls narrow and the cliffs becomes more rugged. Ancient rivers eroded the cliffs giving us a glimpse back to Precambrian times through rock layers. Stop at the West Creek Picnic Area (H2) to either enjoy a picnic under boundless skies or to cool off in the swimming hole, part of Unaweep Seep springs. This area’s unique ecosystem of wet meadow is one of the few habitats of the endangered Nokomis Fritillary butterfly. A mile ahead, the road crosses the Uncompahgre Fault via a sharp carve, and at 8,000 feet you are rewarded with expansive views of the valley and the fascinating striated, gnarled and twisted rocks of Unaweep Canyon.

Next stop is the town of Gateway, heralded by The Palisade, a striking fin of red sandstone. Peregrine falcons have been known to nest in the aeries.

In Gateway, the road parallels the rust colored Dolores River and enters the Dolores River Canyon. In 9-miles, the road follows the canyon’s every twist and turn. The colors of rock, plants, sky and water dazzle and one can feel very small amidst the grandiose cliffs, mesas and buttes.

In contrast to the incredible nature, visit the Gateway Auto Museum (M1) to see over 40 privately-owned vehicles from the Hendricks Collection. Capturing 100 years of automobile history, learn how the automobile impacted society.

30-miles south of Gateway, stop at Hanging Flume Overlook (V3). In the late 1800s, miners built a 7-mile trough to bring water up to a gold mine. A massive engineering feat, when operational, the flume moved eighty million gallons of water into the mine. From this stop, walk to the breathtaking overlook. And have camera in hand.

Just after the flume, you can see the confluence of Dolores River and San Miguel River via a short dirt road on the right. From here on, the road follows the San Miguel River.

The town of Uravan was established in 1936 and is named for the radium, vanadium, and uranium that were processed here for the Manhattan Project. Today, only ruins remain and most of the homes and stores have been removed due to radiation contamination. Many of the early improvements of the road were funded by this industry.

Just after the town of Naturita, the CO-141, CO-90 and CO-145 divide; for this scenic drive, follow the signs for CO-145. In this area, you can see the monument for two Franciscan priests, Francisco Dominguez and Silverstre Escalante, who explored here when searching for a path from California to New Mexico. Heading west on CO-90 will bring you to Utah’s Paradox Valley.

Continuing south on CO-145, rising out of the Dolores River Canyon, the jagged, snow-capped peaks of the San Juan Mountains come into view.

The nearby San Miguel River Nature Conservancy Preserve represents one of the last remaining low to mid elevation riparian areas in Colorado. The wide open landscape is home to a diverse grouping of wildlife including longtail weasels, river otter, gray fox and tuft-eared squirrels. It is also a birder’s paradise designated as an Important Bird Area by the Audubon Society. There is a handicap accessible 180-foot elevated boardwalk for viewing and interpretive signage to guide you through the wonders.

You will notice plant life changing from desert bush to forest, providing a colorful contrast to the red cliff walls. This stretch makes for a spectacular fall scenic drive. Take advantage of the overlooks.

The drive comes to an end as you arrive in Placerville. From here, continue onto the San Juan Skyway by heading south on CO-145 towards Telluride, the southern edge of the Uncompahgre Plateau. If you are doing the drive in reverse, head to the Colorado National Monument or the Grand Mesa.