The Valley of Fire 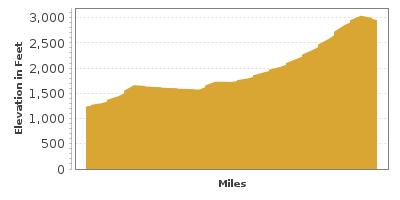 Enter the land of weather-crafted red sandstone sculptures and historic petroglyph covered walls as this scenic route brings you through the Valley of Fire State Park. 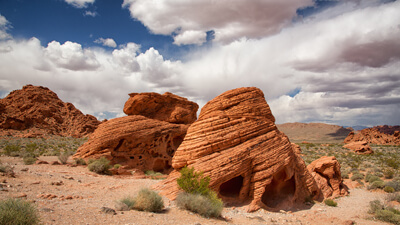 The scenic drive begins in Overton, which you can reach by taking exit 93 from I-15 for NV-169. As you arrive in Overton, Lake Mead will be in the distance and may seem out of place in the middle of the Mojave Desert. The lake was created when Boulder City’s Hoover Dam was constructed in 1936. The lake is the largest reservoir lake in the United States and provides water to Southern California.

In Overton, visit the Lost City Museum (M1) where you can see artifacts, restored buildings, and the history of the lost Anasazi civilization or enjoy some of the sandy beaches on Lake Mead.

From Overton, head south on NV-169 where you will soon be surrounded by desert except for a view of Lake Mead in the distance. As you approach the NV-167 intersection, stay to the right to continue on NV-169 for this scenic drive. Or consider a side trip to Overton Beach (W1). If you do, continue on NV-167 until it joins with State Route 12 and follow it to the end.

Following NV-169 West, you will soon enter the Valley of Fire State Park, named for the red sandstone which has been meticulously carved by time, wind, and rain into incredible, unusually-shaped rock formations. Take advantage of the many turnouts and hiking trails to explore them, including Elephant Rock Vista (V1) or Seven Sisters Vista (V2).

Consider a short side trip on Cabins Road to The Cabins (T1) built with native sandstone in the 1930s by the Civilian Conservation Corps as a shelter for passing travelers and is now a picnic area.

Two miles from the Visitor Center, the Petroglyph Canyon Trail (H1) is a 1-mile trail through canyon walls covered with Native American petroglyphs. A few more miles up the road, you will arrive at Rainbow Vista (V3) which provides awe-inspiring, colorful valley filled with domes and ridges.

Continue north on this road for another 5 miles, where you can enjoy the White Domes Trail (H2) which winds through canyon walls, sandstone formations in contrasting colors and near several cactus species, including beaver tail and cholla.

After returning to the Visitor Center, head west on NV-169 where you will soon arrive at the campground, home of the Atlatl Rock (H3). Atlatl Rock is a petroglyph covered rock accessed by an 84-step staircase. If stairs aren’t your idea of fun, the northern portion of the campground has some wonderful views of the surrounding canyons.

You will soon exit the Valley of Fire State Park and our scenic adventure winds to an end. Continuing north on NV-169 will bring you back to I-15.