A Natural Trail between the Atlantic Ocean and the Pamlico Sound 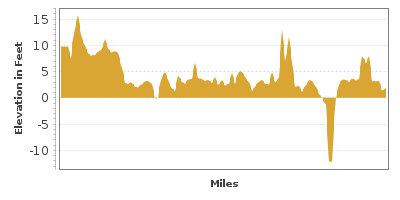 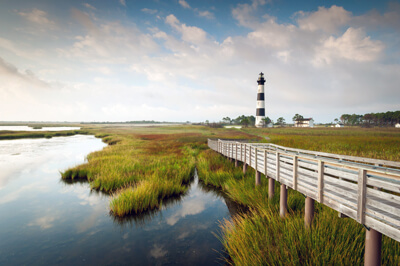 Our scenic drive begins in the town of Points Harbor and travels to Ocracoke and can be done in either direction. To reach Points Harbor, follow US-158 east from US-17, and take exit 258 or 264 depending which one is closer to you. To do the drive in reverse, you will need to take a ferry from either Cedar Island or Swan Quarter Ferry.

From Points Harbor, continue east on US-158 over Pamlico Sound, the largest sound on the east coast. Have your camera ready for stunning views of unspoiled, windswept beaches under dazzling sunshine. After the bridge, follow US-158 along the shore of the Atlantic Ocean until Kill Devils Hills, home of the Wright Brothers National Memorial (H1). The Wright Brothers came to this region with a dream, seeking the strong winds and open spaces for testing their aircraft and in 1903, Orville and Wilbur Wright would fly the first controlled airplane. At the Visitor Center, behold a full scale reproduction of the 1903 Powered Flyer, the 1902 Wright Glider, and other fascinating displays. Stand atop Big Kill Devil Hill — where glider tests were conducted. Explore the reconstructed Living Quarters and Hangar and Centennial Pavilion, which features exhibits on the history and challenges of aviation. There is a small entrance fee valid for 7 days. Children under 16 are free.

Continuing southwest, visit Nags Head Woods Preserve (H2) which protects over 1,000 acres of sand dunes, ponds, wetlands and marshes. A variety of hikes allow you to traverse the diverse ecosystems such as the 2.25-mile round trip Sweetgum Swamp Trail, the 1.5-mile round trip Roanoke Trail, and the easy, half-mile Discovery Trail. Popular for birding, more than 50 species breed here including the yellow prothonotary warbler. Keep an eye out for reptiles, amphibians and rare plants such as wooly beach heather and water violet.

A few miles ahead, stop at Jockeys Ridge State Park (H3), home of the tallest natural sand dune system on the East Coast, varying from 80-100 feet high. Made primarily from quartz rock deposited millions of years ago, the shifting sands constantly reshape the dunes creating a spectacular, living landscape. The park is a popular site for kite-flying and hang gliding and between October and March (with a permit), experience the thrill of sand boarding and kite boarding. Learn more by taking in one of the ranger-led programs and hikes. Leaving the Park, the road naturally curves into the NC-12, hugging the Atlantic Coastline.

As the NC-12 bends, consider heading west on US-64 to Roanoke Island. At Roanoke Island Festival Park (A1) you will find an exciting combination of activities. Explore a reproduction of the 16th-century Elizabeth II, one of seven English merchant sailing ships that arrived in 1585. A hands-on experience, visitors are encouraged to help set the sails, swab the deck, and raise the anchor with costumed-interpreters. Have fun while learning at the Roanoke Adventure Museum, the Roanoke Island Maritime Museum, American Indian Town and Cultural Education Center, 45 minute film presentation and art gallery. The admission price is valid for two consecutive days and children under 5 are free.

Still on Roanoke Island, continue north on US-64 to visit the Fort Raleigh National Historic Site (A2). The reconstructed fort was originally built in 1585 and along with other exhibits, offers a glimpse into the first contact between the English and Carolina Algonquin Indians, the struggle of the colonists to survive in the harsh environment, the arrival of the Freedmen, and Civil War Battle that took place on the island. By 1590 the settlers inexplicably disappeared, leaving only the word “croatan” carved into a fence post. An outdoor theatrical performance “The Lost Colony” written by Pulitzer Prize-winning playwright Paul Green, has been telling the story since 1937.

Don’t miss the nearby exquisite Elizabethan Gardens, replete with color, textures and the flitting of butterflies. Formal plantings, fountains and sculptures create an idyllic environment for which to stroll. There is an entrance fee, children 5 and under are free.

The North Carolina Aquarium (A8) on Roanoke Island delights and amazes people of all ages with fresh and saltwater inhabitants such as sharks, river otters, alligators, sea turtles, horseshoe crab and more. Stroll the boardwalk trail which leads to a marsh off Bogue Sound.

Retracing back to the NC-12/US-64/US-158 junction, head south on NC-12 where shortly, the Whalebone Junction Information Center (I1) will be on your right. Stop here for maps and information about the Cape Hatteras National Seashore.

As you continue, you will drive past marshland and then arrive at the sandy dunes of Coquina Beach (W1), so named for the coquina clams that are found here. Great for swimming, this is one of three life-guarded beaches along this drive. Though the water looks enticing, watch out for strong waves and rip currents. Strewn about the beach are the ship-wrecked-remnants of the 4-masted schooner, Laura A. Barnes. Due to the volatile nature of the winds and waves, storms, shoals, pirates and war, many pieces of wreckage can be found along the Outer Banks beaches. They come and go at the whim of the weather. Please use only your camera to capture the memories. While here, consider a side trip on Bodie Island Lighthouse Road to visit the Bodie Island Lighthouse (A3). Built in 1872, the lighthouse stands at 156 feet and has 214 steps. The lighthouse is presently not open to the public. Visit the Bodie Visitor Center for more information.

Back on NC-12, you arrive at Oregon Inlet which provides spectacular views of the Atlantic Ocean and Pamlico Sound, especially as you cross the Herbert C. Bonner Bridge. Pea Island National Wildlife Refuge (A4) is a must stop for nature lovers and bird enthusiasts. Over 350 species of birds make their home among the dunes, fresh and brackish ponds, salt flats and marshes including the endangered and threatened Peregrine falcons and piping plovers. The refuge also protects loggerhead sea turtles which lay their eggs on the beaches. Learn more at the Visitor Center or by participating in one of the free programs. Fascinating guided canoe tours explore the island and its inhabitants from a different perspective. Reservations are required and a fee is charged. Observe wildlife on the North Pond Wildlife Trail, a half-mile, fully disabled accessible trail, or beachcomb along 13-miles of pristine beach.

Heading south on NC-12, behold the power of the Atlantic Ocean as it reshapes the land. Sandbag walls have been erected in several places along this next stretch of road to preserve the shoreline.

As you arrive in the town of Rodanthe, stop at the Chicamacomico Lifesaving Station (A5) built in 1874 to rescue sailors from the sea. In 1915 the U.S. Lifesaving Service evolved into the Coast Guard. On the National Historic Register, the buildings comprise one of the most complete lifesaving complexes on the Atlantic Coast. Museums display early lifesaving and coast guard technology, pieces of shipwrecked vessels and the stories of daring rescues and heroes who risked their lives.

For the next several miles, the road passes through a number of small communities, offering glorious views of the Atlantic Ocean and the Pamlico Sound. The Sound is a haven for windsurfing, parasailing, hang gliding, ocean kayaking and surfing as big winds and big waves combine for a thrilling ride. Just want to watch or wade in the warm shallow waters? Canadian Hole (A9) just north of Buxton is the spot. Outfitters nearby rent equipment.

As you approach the town of Buxton, take a side-trip to the photogenic black and white barber-striped Cape Hatteras Lighthouse (A6). Built in 1870 and standing 198.5 feet, it is the tallest brick lighthouse in the U.S. Guiding ships around Diamond shoals, known as the “Graveyard of the Atlantic” for the hundreds of shipwrecks, the lighthouse was moved and restored in 1999 due to the encroaching sea. Climbing to the top is a popular but strenuous activity. Equal to climbing a 12-story building, the 257 steps is a challenge but those who succeed are rewarded with unparalleled panoramic views. A fee is charged to climb to the top and if you’re here during the busy summer season, be prepared to wait your turn. While here, explore the maritime forest of Buxton Woods along the Buxton Woods Nature Trail (H4). This 3/4-mile loop trail leads through trees gnarled by the ocean winds, and offers the chance to spot bald eagles, southern dusky salamanders and two species of rare butterflies, the northern hairstreak and giant swallowtail.

The Graveyard of the Atlantic Museum (M1) explores the Maritime history, piracy and warfare of the outer banks. Admission is free but donations are appreciated.

Back on NC-12, continue towards Hatteras and ride the free, 40-minute ferry to Ocracoke Island. Along with the beautiful beaches and romantic sunsets, the island is a lively community with events and festivals, restaurants, local shops and accommodations. Stop at the Ocracoke Visitor Center (I2) for activities and information. Explore the 18th-century architecture and history of the island with a visit to the Ocracoke Preservation Society Museum (M2). The museum is free and donations are accepted. The Ocracoke Lighthouse (A7) built in 1823, is still active and North Carolina’s second oldest. It is not open to the public. The Ocracoke Inlet was a favorite hideout of the infamous Blackbeard the Pirate and he met his demise battling in these waters. The possible remains of his ship, the Queen Anne’s Revenge, have been discovered and archaeologists and divers are working to preserve the legacy.

The NC-12 ends at the ferry. You can either retrace your steps back to Kill Devil Hills or take the ferry to Cedar Island or Swan Quarter.