Nestled between the Adirondack and Green Mountains 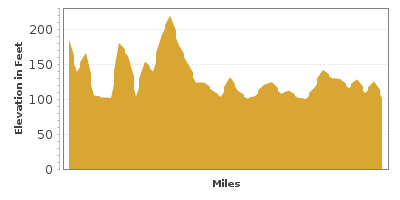 The Champlain Islands sit amidst Lake Champlain, America’s sixth-largest, freshwater lake. Passing five quaint towns, discover a rich history, friendly people and a vast array of recreation opportunities, such as hiking, biking, boating and fishing or just absorbing the captivating water views, wildlife and dazzling sunsets. A four season wonderland, spring and summer bring theater and musical performances to the parks and the fresh scents of farms and orchards. Fall is renowned for its flamboyant display of color, and winter winds wisp across sun-glistened snow — and cross-country ski or snowshoe tracks. This spectacular region is just a short drive from the larger cities of Burlington, Plattsburgh, and Montreal. 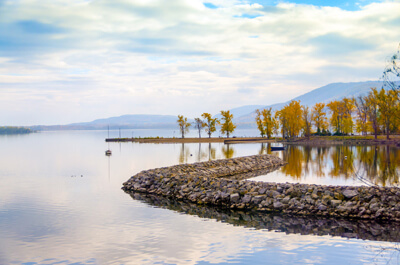 Our scenic drive travels US-2 from Colchester to Alburg, but can be done in either direction. To reach Colchester, take exit 17 from I-89 for US-2 West.

Make your first stop Sand Bar State Park (W1), a natural sandbar created by sediment from the Lamoille Valley swept downstream by the Lamoille River. Shallow warm water and sandy beaches are popular for swimming — especially with kids. The park features canoe and kayak rentals, covered picnic shelters and BBQ grills. Don’t forget to admire the Stone Bath House, built in 1933 by the Civilian Conservation Corps. At the south and east ends of the park are marshland, part of the 1000-acre Sandbar Wildlife Refuge. Spring and fall bring migratory birds and among the year-round residents are beaver, muskrats, frogs and turtles. There is a day use fee to enter but if you plan on visiting other Vermont State Parks, consider a seasonal vehicle pass or punch card which is valid for 10 visits and never expires. Though there are no fees or services open in winter, the park is a big draw for snow-kiting, where kites are used to glide across the snow on skis or snowboards and trails can be used for cross-country skiing and snow shoeing.

Along the trip, keep your eyes out for Champ, the Lake Champlain version of the Loch Ness Monster. In 1609, Samuel de Champlain declared he saw a 20-foot snake-like creature with a horse-like head in the lake. There has since been over 300 reported sightings, but the camera-shy creature has never been caught on film. Have your camera ready.

The flat and gently sloped terrain of the islands are ideal for biking. Rent a bike or bring your own to travel the Champlain Islands Bikeways, a network of 5 bicycle routes passing historic hamlets, beautiful vistas and wildlife around Lake Champlain in New York, Vermont and Quebec.

Crossing the bridge to South Hero Island bestows grand views of Lake Champlain and New York’s Adirondack Mountains. The island is well known for its apple orchards and from August to October taste the season by picking-your-own or sampling fresh baked pies or cider. Throughout Vermont there is a low-key but exciting agritourism scene and many farms, bakeries, cheese makers and wineries offer tours and tastings.

The South Hero Bicentennial Museum (M2) was built in 1925, originally as a library in memory of Arthur Landon who died in WW1. In 1976, it was reopened, restoring and cataloging artifacts and the history of South Hero. It has limited hours so please check before heading out. Admission is free but donations are appreciated.

Note that by taking VT-314 heads to the Ferry linking Grand Isle with Plattsburgh NY. The Ferry runs 24/7 year round. Credit cards are not accepted at this crossing, though an ATM is available.

History buffs will want to stop at the Hyde Log Cabin (A1). Believed to be the oldest, original log cabin in the United States, it was built in 1783 by pioneer settler, Jedediah Hyde. The one-room cabin and loft space allow a small glimpse into the life of the early pioneers. It was moved to this location in 1946. Here you will also find the Block Schoolhouse which served as a community hub, hosting town meetings and church services. It was built in 1814 with square-hewn logs, laid with sand and mortar.

Heading north, you soon cross over Lake Champlain via a drawbridge to North Hero Island. Gaze upon expansive views of the Adirondacks and Lake Champlain and to the east, you may even see Jay Peak, the northern-most Green Mountain peak. Enjoy pastoral scenes of agriculture, barns, rolling green hills and boats, as you’re never far from the peaceful waters. Sandy, warm beaches ideal for swimming, boat rentals, picnic areas and spectacular views of the Adirondacks and the Green Mountains await at Knights Point State Park (H1). Explore unique and diverse plants by walking the loop trail in the State Natural Area. The park also houses the Island Center for Arts and Recreation, where you can enjoy cultural, musical and theatrical events.

The pristine Knight Island State Park (H5) can only be accessed by boat and if you don’t have your own, two water taxis are in operation. A little difficult to get there, but your efforts will be rewarded with outstanding, unspoiled views and solitude. The 185-acre island offers 7 remote area camping sites. Prepare to rough it.

Continuing north on US-2, and just before leaving North Hero, is a sign leading to the much more accessible, North Hero State Park (H2). Overlooking Maquam Bay it is an excellent location for camping, picnics, fishing or exploring the unique floodplain habitat around Lake Champlain which is home to white-tailed deer, chain pickerel and northern pike which spawn and feed here and map turtles which nest along the beach.

Back on US-2, head west and cross the bridge to Alburg. The diversity of ecosystems is fascinating on this relatively short drive and none more so than at Alburg Dunes State Park (H3). Glacial till, soil carried from melted glaciers, deposited the sand that now creates the beaches and dunes. The natural barrier island is a haven for swimming and picnicking. Explore the fantastic landscape of the dunes carefully so as not to disturb the rare Champlain beach grass and low-growing beach-pea which struggle to survive. Kayak, canoe, and rowboat rentals offer views from a different perspective. The park is popular for bird watching, and spring and fall migration bring thousands of common goldeneyes, ring-necked ducks, hooded mergansers and northern pintails. In winter, see bohemian waxwings, snow buntings and snowy owls. Among the marsh and swamp resident’s mammals are woodchuck, mink, fox, moose and deer.

Consider a side-trip along VT-129 to St. Anne’s Shrine (A2) on Isle La Motte. Vermont’s first French Settlement in 1966 was dedicated to “la bonne Sainte Anne” to protect against Indian attacks. In 1859 the cornerstone of the new Church of St. Anne was laid and today you can visit the chapel, attend mass, or picnic on the grounds and enjoy incredible views and beach.

Isle La Motte is also the site of the 480 million year old Chazy Fossil Reef. Throughout the 19th century, quarrying the unique black and grey limestone for distinguished customers such as the Vermont State House and Radio City Music Hall, workers wondered about the unusual forms that appeared in the rock — until they were identified by paleontologists as marine fossils and that the stone was actually fossil remnants of an ancient reef. The now-preserved Fisk Quarry is free, and features a Visitors Center and trail exploring the fossilized remains of cephalopods, stromotoporoids and gastropods.

Back on US-2 heading north, our scenic drive comes to an end as you approach the Rouse Bridge to New York. From here, there are a few options.

Retrace your way back to VT-78 and head to the Missisquoi National Wildlife Refuge (A3). More than 6,700-acres of marsh, upland forest and wetlands create an ideal habitat for wildlife and attract large flocks of migratory birds along the Atlantic Flyway between northern breeding grounds and southern wintering areas. Here you’ll also find Vermont’s largest colony of great blue herons. A haven for wildlife observation and photography, discover rare and unique plants such as the threatened Virginia chain fern on the 3-mile round trip Old Railroad Passage Trail. Or take the Discovery Trail — a one-mile loop passing ponds, forest and the Maquam Bog. In winter trails are open for cross-country skiing and snowshoeing. There is no entrance fee to the refuge. In season, enjoy blueberry picking just off Tabor Road.

Or continue on US-2 into New York and follow US-9 towards Plattsburgh. Take the ferry between Cumberland Head, New York and Grand Island, Vermont, or continue further south on US-9 through the Adirondacks and to Ticonderoga along the Lakes to Locks Passage and explore the fort that was taken over during the Revolutionary War by Ethan and Ira Allen, for which the North Hero and South Hero towns are named.