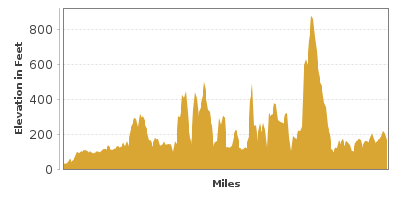 Traveling along the shores of Lake Champlain between the Adirondack and Green Mountains, discover lush forests, a sandstone gorge, and splendid vistas. Steeped in history, the region was key to the Revolutionary War and the War of 1812 and many historical sites are highlighted in this drive. 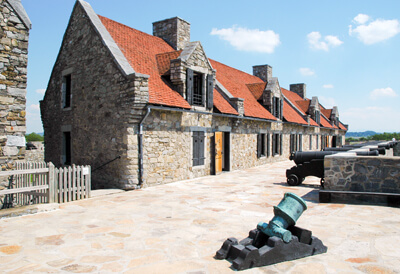 The scenic drive starts in Waterford and following Lake Champlain and the Vermont border to Rouses Point, near the Quebec border. It is a great drive to use in conjunction with two of our other drives; Champlain Islands and Vermont 22A.

Before leaving Waterford, stop at the Waterford Harbor Visitor Center (I1) to see and learn about the Erie Canal. Completed in 1825, it was an integral link between the Great Lakes and the Atlantic Ocean and instrumental in establishing New York City as a premier eastern port. Watch the myriad of boats pass through Lock #2 (there is no #1), walk along the north side of the canal or hike or bike the 3-mile Old Champlain Canal Towpath. While in the area, consider a side trip on the Mohawk Towpath Scenic Byway (T1). Twenty-six miles one way travels along the Mohawk River to Schenectady. Explore Cohoes Falls, Peebles Island State Park (H1), and Vischer Ferry Nature and Historic Preserve (H2) on the way.

Heading north on US-4, the road parallels the Hudson River as it passes several farming towns. In Saratoga, visit the Saratoga National Historical Park (A1), site of the Battle of Saratoga in 1777, considered the turning point of the Revolutionary War. The park is comprised of four separate areas; the Battlefield which is located in Stillwater, the General Phillip Schuyler House in Schuylerville and the Saratoga Monument and Victory Woods both located in Victory, all of which are about a 15 minute drive from the Battlefield. The visitor center at Battlefield features an orientation film, interpretive exhibits and artifacts. Pick up a map and brochure and take a self-guided walking, bike or auto tour that covers 10 major highlights over 10 miles. The Schuyler House was the country home of General Philip Schuyler before and after the battle, having been rebuilt in 1777 after being burned down by the British to keep Americans from using them for cover. The Saratoga Monument is a 155-foot obelisk commemorating the American victory. Listen to the ranger-led presentation and climb almost 200 steps to the top for unique vantage point from which to ponder the past and take in extraordinary views of the Adirondacks, Green Mountains and Taconic’s. On three sides, statues of Generals Schuyler, Gates and Morgan adorn the niches, while the fourth, once intended for Benedict Arnold is left empty. The newest addition to the park is the 22-acre Victory Woods, once an encampment site for the British Army. Walk the mile long Victory Woods trail which begins in Prospect Hill Cemetery, Interpretive panels highlight historic points along the trail. Part of the National Parks System, there is an entrance fee covered by the America the Beautiful Annual Pass.

From here, cross over the Hudson River and head north to Fort Edwards. At the Rogers Island Visitor Center (I2), learn about the Native Americans who lived here in 1000 B.C. and the history of the French and Indian War, and view artifacts from the Little Wood Creek Archaeological Site. In September, observe the annual French and Indian War Encampment, with living history demonstrations, drills and reenactments. Open seasonally, admission is free. Stop at the nearby Old Fort House Museum (M1) which was built in 1772 with logs from Fort Edwards. The museum features furnishings and art from the 1700s through the 1940s. On the grounds are the 1840 Toll House, a school house, law office, barn and more. Don’t miss the Doctors Apothecary Garden, growing an array of plants with medicinal properties such as New York Ironweed, wild Senna and Rattlesnake master. There is a small entrance fee for anyone over 18.

With so much water all around — it’s time for some water recreation. Consider a side-trip to Lake George (W1) which features 32-miles of beach access, boating, tubing, whitewater rafting, water skiing, fly fishing and more! Explore Lake George Beach State Park, Lake George Battlefield Park and Fort William Henry (A2). Surrounding the Lake, you will find quaint shops, factory outlets, restaurants and lodging. To get there, follow US-9 and NY-9N.

Continuing north on US-4, you arrive in the town of Whitehall, the birthplace of the US Navy in 1776 since Benedict Arnold constructed a fleet of ships here to prevent the British from invading. Visit the Skenesborough Museum (M2) to learn about the history of Whitehall, through dioramas, maps, photographs and artifacts such as wooden ship models, farm equipment, home furnishings, dolls and more. Traveling from Whitehall to Rouses Point is the Lake Champlain Blueway Trail, a guided, recreational water path for paddlers and boaters. Discover more than 90 points of interest including parks, wildlife viewing spots, geological curiosities, historic sites, museums, and campgrounds.

At Whitehall, the road forks. Bear left to take NY-22 which heads towards the south-western flank of Lake Champlain. To the west stand the Adirondacks and to the east, the Green Mountains. The Green Mountains were formed 45-million years ago by Continental drift and are an extension of the Appalachian Mountains. Once as tall as the Alps, erosion and Ice Age glaciers have shaped them to their current beauty of gentle rolling green peaks. Observe the tell-tale signs of the U-shaped valley that surrounds Lake Champlain.

You will soon arrive in the town of Ticonderoga, home of the famous Fort Ticonderoga (M3). Strategic for its location between Lake George and Lake Champlain, the fort was built by the French military between 1755 and 1759. It was later captured by the British and renamed Fort Ticonderoga. Later, during the American Revolution, this site was one of the first victories after Ethan Allen, Benedict Arnold and a small band Green Mountain Boys took control of the fort in 1775 in a surprise attack. Learn about Native American life, culture and trade, march to the beat of Fort Ticonderoga’s Fife and Drum Corps, discover historic weapons and everyday objects used by soldiers. There are many hands-on activities, demonstrations, costumed interpreters and guided tours. The Fort is open from May 18 through Oct 18 and charges an admission fee which includes access to all exhibits and fascinating gardens (Note it is free for local residents).

While the Fort displays sweeping views of Lake Champlain and Vermont, take a side-trip to the summit of Mount Defiance (T2) for a spectacular panoramic view overlooking the Champlain Valley.

Continuing north on NY-22, you soon pass the town of Crown Point. To the northeast is Crown Point State Historic Site (M4). The tip of this peninsula was key to military activity and preserves the fascinating ruins of Fort St. Frédéric built between 1734-1759 by the French, and Fort Crown Point which began construction in 1759 by the British during the French and Indian War. Learn more at the museum via an orientation film, artifacts and exhibits. To the south of the ruins is the Champlain Memorial Lighthouse named for Samuel de Champlain who explored this region in the early 1600s. The unusual neoclassical design features eight Doric columns and a bronze bust by French artist, Auguste Rodin. Climb the 60 steps to the top for a grand vista.

Next stop is the town of Keeseville, home to one first tourist attractions in the United States, the Ausable Chasm (A3). The awe inspiring sandstone gorge was carved by the Ausable River on its way to Lake Champlain. Explore the incredible rock formations such as Elephants Head Rock, caves and waterfalls on a guided tour, walk the entire length of the chasm on the Rim Walk or take a rafting or tubing adventure through the chasm. Camping and cabin rentals are available.

Back on the NY-22 heading north, you arrive in Plattsburgh, where the last major battle of the War of 1812 was fought and won by the United States using ingenuity of its commander, Commodore Thomas Macdonough. In Macdonough Park (H3) across from City Hall is the Macdonough Monument, a 135-foot obelisk, each of its four sides represents the ships of his fleet, Saratoga, Ticonderoga, Preble and Eagle. Inside you will find interpretive panels and 156 steps to impressive views.

Immerse yourself in nature at Point Au Roche State Park (H4). Explore over 800 acres of woodland, meadow, marsh and lakefront by hiking and biking the many trails, or participating in programs offered at the Nature Center. Relax with a picnic on the sandy beach, take a dip, or do some boating. In winter, this park is popular for ice fishing and cross-country skiing.

The scenic drive comes to an end in the quaint village of Rouses Point. Stroll the downtown Main Street or take in the views from the lakefront park. Here, you can either head into Canada (the cosmopolitan city of Montreal is just a 1.5 hours away) or cross over the Korean Veterans Memorial Bridge into Vermont to explore the Champlain Islands. Keep an eye to the north to see Fort Montgomery, also known as Fort Blunder, which was erroneously built on Canadian soil. The fort and grounds are privately-owned and not open to visitors.