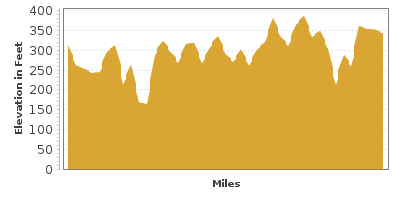 Vermont 22A Highway travels through the Lake Champlain Valley. Gaze upon expansive, vibrant green hills dotted with the black and white patterns of holsteins, red weathered-barns, white-steepled churches, and an impressive fall palette that have leaf-peepers flocking. Add in majestic views of the Adirondacks, small-town hospitality and a rich history and you’ll find much to discover. 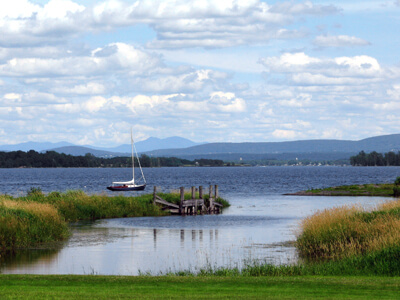 Our scenic route begins in the town of Vergennes and travels to Fair Haven, and can be done in either direction. To reach Vergennes, follow US-7 south from Burlington. On the way down, stop at Mount Philo State Park (H1) which offers a steep, winding drive to the 968-foot summit of Mount Philo (It is not recommended for trailers). Created in 1924, this is Vermont’s oldest state park. Picnic mountaintop amidst lake, valley and mountain views, hike or enjoy this popular birding destination known as one of the best hawk-watching sites in Vermont. Most Vermont State Parks, charge a day use fee. Consider a seasonal vehicle pass or punch card which is valid for 10 visits and never expires.

Established in 1788, Vergennes is Vermont’s oldest city. Stroll the historic downtown and savor the diverse assortment of restaurants, bars, antiques shops and locally-made products. The Lake Champlain Maritime Museum (M1) celebrates the rich history of Lake Champlain, one of the most important waterways in the Northeast. Board a replica of the 1776 gunboat Philadelphia II, explore over 300 shipwrecks, vintage watercraft, photos and more. There is an entrance fee and the museum is open seasonally from late-May to mid-October.

Or visit Button Bay State Park (H2) which sits along the shores of Lake Champlain. Named for the unique, button-shaped clay discs found here, the park features a life-guarded swimming pool, canoe, kayak and rowboat rentals, tent and RV camping and breathtaking views of Lake Champlain and the Adirondacks.

This region is a cyclists dream with many great routes. Explore unspoiled lake views and rural Vermont on Rebel’s Retreat, a 42.5-mile loop or on the 28.5-mile Otter Creek Wandering.

The drive travels through farm country, passing verdant pastures and magnificent views of the Adirondacks, to Addison. Here you will find the Chimney Point State Historic Site (A2) which highlights the story of Vermont’s Native American, French colonial and early American settlers through historic buildings, artifacts and exhibits. Open seasonally from late-May to mid-October, check the website for hours. To the west is the Dead Creek Wildlife Management Area (A1), which protects a popular stop for migratory birds. Among the summer inhabitants are waterfowl, grasshopper sparrows and upland sandpipers. In winter, look for snowy and short-eared owls, peregrine falcons and horned larks. Fall migration is astounding, with more than 20,000 Snow and Canada geese stopping here.

For the next several miles, enjoy pastoral scenic farms and gentle rolling hills, peppered with photogenic white church steeples. Shoreham is an agricultural community of orchards, dairy and vegetable farms. Depending on the season, pick your own apples, peaches and berries or stop at one of the road-side stands.

Consider a detour west on VT-74 to immerse yourself in the Nation’s history. At Larrabee’s Point in Shoreham, catch a ferry to Ticonderoga, New York. The scenic seven-minute ferry is operational between mid-June to late-October. There is a fee to cross and you should confirm the schedule and hours before heading out. Once across, explore Fort Ticonderoga (M2). Built by the French military between 1755 and 1759, it was later captured by the British and renamed Fort Ticonderoga. Later, during the American Revolution, this site was one of the first victories after Ethan Allen, Benedict Arnold and a small band Green Mountain Boys took control of the fort in 1775 in a surprise attack. Learn about Native American life, culture and trade, march to the beat of Fort Ticonderoga’s Fife and Drum Corps, discover historic weapons and everyday objects used by soldiers. There are many hands-on activities, demonstrations, costumed interpreters and guided tours. The Fort is open from May 18 through Oct 18 and charges an admission fee which includes access to all exhibits and fascinating gardens (Note it is free for local residents).

Nothing says Vermont more than covered bridges. The Shoreham Covered Railroad Bridge (B1) was built by the Rutland railroad Company in 1897. Restored in 1983, the bridge is one of three covered trestle bridges still standing and is now part of a hiking trail. Get there by taking a side trip east on Richville Road, then a right on W Road and then another right onto Murray Road.

Back on VT-22A, in a few miles you arrive in the town of Orwell, where a drive west on Mount Independence Road will bring you to the Mount Independence State Historic Site (H3). Literally walk in the footsteps of history on trails that explore the well-preserved remains of the Revolutionary War fortifications which were built to guard against British attack in 1776. All trails begin at the Visitor’s Center and one is handicapped-accessible. There is a small admission fee, children 14 and under are free. The site is open late-May to mid- October.

Nature lovers will want to head east from Orwell on VT-73 to the Moosalamoo National Recreation Area (H5). Nestled in the heart of the Green Mountain National Forest, the MNRA comprises almost 16,000-acres from which to revel in the fresh mountain air or partake in the many recreation opportunities such as hiking, biking, swimming, fishing and camping, or in winter, snowshoeing, snowmobiling and cross-country skiing. Wildlife watchers can look for signs of beaver, porcupine, snowshoe hare or woodchuck and birders will delight in the many species found here including the raven, yellow-throated vireo and Vermont’s state bird, the hermit thrush. Over 70 miles of trail provide hikes for every level. Experience the graceful and stunning beauty at the Falls of Lana and continue onto Silver Lake on a hike accessed by the parking area off VT-53. Commemorating the poetry of local literary hero, Robert Frost, is the Robert Frost Interpretive Trail, a 1.2-mile accessible scenic loop that displays his poetry in the woods and fields.

Once again on VT-22A, the terrain transforms to hilly forest. Though our scenic drive comes to an end in the picturesque town of Fair Haven which is features Greek Revival style buildings, art galleries, antiques, restaurants and accommodations. Nearby, Bomoseen State Park (H4) offers 3,576 acres of sand, meadows and forest perfect for a family outing. Have fun swimming, boating and fishing on Lake Bomoseen or take in a hike searching for wildlife or on the self-guided Slate History Trail which explores the region’s slate quarry past. Just before the town is the intersection with US-4, where you can either head west into New York or head east towards the Vermont 100.