From Colonial Times through the Revolutionary War 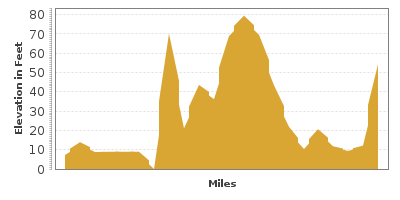 This historic scenic drive travels through 174 years of history, beginning in Jamestown, site of the first permanent English Colony in 1607 to Yorktown where the American Revolutionary War was won in 1781. This drive can be done in either direction. To reach Jamestown, head south on VA-614. 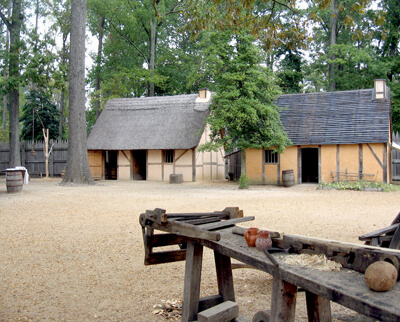 In Jamestown, head south to Historic Jamestowne National Park (A1). An entrance fee is charged and covered by the America the Beautiful Pass. Immerse yourself in the nation’s beginnings, retracing the steps of Captain John Smith and Pocahontas. The Island Loop Drive (which also can be done on foot or bike) is a 5-mile trip back in time, where you can experience the daily life, industrialism and challenges faced by the colonists, via paintings and interpretive panels. Visit the excavation site of the 1607 James Fort and the Jamestown Glasshouse one of England’s first attempts to create a manufacturing presence in America. Learn more at the museum, or by taking one of the many free guided tours or living history tours with costumed interpreters.

Just across the bridge lies the Jamestown Settlement (M1). Artifacts and exhibits tell the story of the people who founded Jamestown, Virginia’s Powhatan Indians and the origins of the first known Africans. Explore a recreated Powhatan village with reed houses and learn from historical interpreters how they made tools, pottery, processed animal hides and more. Replicas of three sailing ships that brought the colonists to Virginia, the Susan Constant, Godspeed and Discovery are open for visitors. There is a fee and if you’re planning to enter the Yorktown Victory Center (which is later on the route), consider a combination ticket. Children under 6 are free.

Following the Colonial National Historic Parkway, the road parallels James River which is frequented by egrets and herons. Soon the road veers north through a forest of sycamore and oak on the way to Williamsburg. Steeped in history, this region is also spectacular countryside and home to wildlife including deer, opossum and Red Tail Fox. Fall foliage puts on an incredibly colorful display.

At the Colonial Williamsburg (A2), you can experience the town as it was in the 1700’s in the world’s largest living museum. The Historic Area of Colonial Williamsburg spans 301 acres and features 88 original 18th century structures as well as hundreds of reconstructed homes, shops and public buildings. Costumed interpreters, tell the stories of the people who lived here — the most populated outpost in the New World. If your timing is right you may catch a performance of the renowned Fife and Drums who carry on the tradition of military music. Easily a whole day can be spent here exploring the town, trade shops, museums and gardens. An admission fee is charged.

Back on the Colonial National Historic Parkway, stay to the right at the tunnel to continue to Yorktown. The road once again heads through forest until it opens up to the York River.

The Yorktown Victory Center (M2) celebrates the victory of the American Revolutionary War and chronicles America’s transition from Colonial status to nationhood through a variety of exhibits such as the Declaration of Independence Gallery, hundreds of artifacts and films. Explore the Continental Army Encampment where costumed interpreters demonstrate the daily routines such as musket and artillery firing, surgical practices and you can try on a military coat and learn how to fire a cannon. An admission fee is charged and discounts can often be had by purchasing tickets online in advance.

As you continue south towards Yorktown, you arrive at the Colonial National Historical Park (A3) which preserves the battlefields that changed the course of the American Revolutionary War. Drive the 7-mile self-guided tour through the battlefields and see fortifications, cannons and historic buildings. Learn more at the Yorktown Battlefield Visitor Center or by taking one of the free ranger-guided tours. An entrance fee is charged and covered by the America the Beautiful Pass.

From here, consider heading south on I-64 towards Virginia Beach where you can enjoy the Atlantic Ocean and the Chesapeake Bay-Bridge Tunnel.