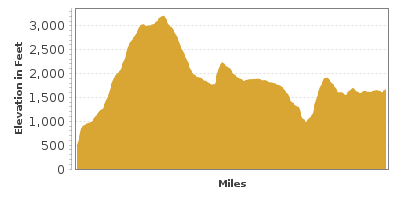 The drive starts in Cook and goes to Goldendale, but you could drive it the opposite direction. From WA-14, turn right onto the Cook-Underwood Road, which if you are going east, it is just before Drano Lake and the WA-141. To start from Goldendale, turn west onto WA-142 from US-97, which you can also get to via the WA-14.

The scenic drive starts out slowly through some winding roads towards Willard. About a mile from Willard on the right is the Willard National Fish Hatchery (A3) which rears Coho and Chinook salmon.

Continuing northwards, the drive passes the Big Lava Bed (H4), a 9,000-year-old lava formation and there are several hikes in this area.

Shortly after the Big Lava Bed, the road will become a dirt road. Passenger cars can continue from this point on, just keep it slow.

Towards the end of South Prairie Road (Forest Road 66), stop and view the lake on the right. From here, the road quickly becomes Forest Road 60 (known as Carson-Guler Road on some maps) and this will into Forest Road 24 shortly.

A short while after the gravel road ends, you will reach the intersection with Forest Road 24 where you need to turn right. Within a few miles, there are a few ice caves, including Guler Cave (H3) and Ice Caves (H5). Most of these are formed by air pockets from volcanic eruptions and the ice is formed by condensation from the cold air at the bottom of the cave. This ice used to be used as refrigeration for hundreds of years prior to modern day refrigerators. As you can imagine, the caves are cool, dark, slippery, and muddy, and if you do choose to walk within them, watch your head.

Just coming out of the Gifford Pinchot National Forest, Forest Road 24 will turn into WA-142. Cheese Cave Road is less than four miles from here, and it will bring you to a half-mile long cave that is very much like a refrigerator. Its climate is very similar to that of the France’s Roquefort caves used for making cheese. When this was discovered in the 1930s, experiments done not only proved that the climate could produce similar cheese, but it was also the best Roquefort-type cheese produced in the United States.

The Mount Adams Ranger Station (I1) is on the right about 3/4 of a mile from the Cheese Caves Road. To go into the Mount Adams wilderness, you must register here and get information about the perfect trail for you.

When WA-141 intersects with Mount Adams Road, turn left onto it. While our drive continues by turning right onto Sunnyside Road, you can continue on Mount Adams Road to A. G. Aiken Lava Bed (H6).

If you are in a hurry to get back to WA-14 (Lewis and Clark Memorial Highway), you can head south on WA-141. Keep an eye out for livestock and other animals. Some of the livestock in this area is unfenced, including some bulls.

Just after Glenwood, you will drive through the Klickitat Wildlife Area (H1), which offers viewing opportunities of black tailed deer, bighorn ram, and various birds and other mammals. If you look to the south, Oregon and the Columbia Gorge will be visible and to the northwest, Mount Adams is usually within view. The road will parallel the scenic Klickitat River for many miles.

At the end of Glenwood-Goldendale Road, turn east onto WA-142. The remaining parts of the drive are flat. In 10 miles, you will arrive in Goldendale.

Goldendale features many historic homes and tours. The Klickitat County Museum (M1) is at the Presby Mansion and the 3-story home is filled with furniture, clothing, utensils and personal items from the 1800’s to the 1930’s and also features other pioneer exhibits.

At night, Goldendale Observatory (A1) offers you an opportunity to see the night sky through telescopes and learn about astronomy.

From Goldendale, you can either continue east on the Lewis and Clark Memorial Highway or head north towards I-90 on through the Yakima Valley.