Follow the Columbia River journey taken by Lewis and Clark 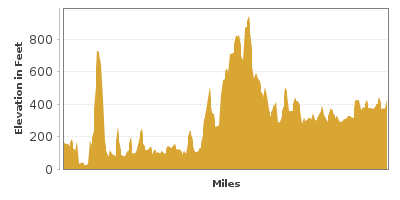 The Columbia Gorge marked the end the Lewis and Clark Expedition when they reached it in 1805. The first highway through this area was completed in 1915 and made this area much more accessible and loved ever since. 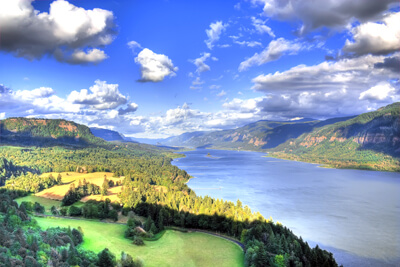 If you are in a rush during any point of this trip, take a bridge southward to the I-84/US-30 which is just across the Columbia River in Oregon. This highway has multiple lanes and the speed limit is less variable. Since these two drives are essentially parallel, we have included some of the Columbia Gorge’s attractions here, but you may want to look there for some hidden gems.

The gorge began taking shape about 17 million years ago and was greatly influenced by the Cascade Mountains, the Ice Age, and the flooding of Lake Missoula.

The official Columbia River Gorge National Scenic Area begins two miles east from Washougal. The road follows the river through all of its twists and turns and hills where you can revel in the beauties of the Columbia River. There are many pullouts from this point on.

The 366-acre Fort Vancouver National Historic Site (A9) in Vancouver, encompasses multiple attractions, Fort Vancouver, Pearson Air Museum and Pearson Field Education Center, and the McLoughlin House. Orient yourself at the Visitor Center, which features a film, interpretive exhibits and artifacts, as well as tours and educational programs. Explore the reconstructed Fort Site with buildings such as the Bakehouse, Blacksmith Shop and Chief Factor’s Residence. Officer’s Row features 22 restored 19th-century buildings, all listed on the National Historic Register. Large expanses of grass and forest surround the buildings with ample opportunity to let kids run free and enjoy a picnic. Don’t miss 3rd Saturday Living History demonstrations portraying members of the Civil War-era 1st Oregon Volunteer Cavalry. Only the Fort has an entrance fee, which is covered with an America the Beautiful Pass.

Beacon Rock State Park (H1) is about a mile east after the town of Skamania. It is the heart of an ancient volcano and features a few trails in the area, including a steep, one-mile trail that brings you to the top of the rock. The rock itself was named by Lewis and Clark and is itself one of largest monoliths in the northwest. Beacon Rock State Park also features beach access and Pierce National Wildlife Refuge (H3) is nearby.

Continuing east, you will see the Bonneville Dam. The Bonneville Dam Visitor Center (A4) offers tours and has a fish ladder which depending on when you visit, could have a few fish or thousands of fish. This gives you a chance to see the tremendous size of the gorge and the dam.

A short distance from the Dam will be the Bridge of the Gods (B3) and Cascade Locks. About a thousand years ago, a landslide caused the Columbia River to be dammed, resulting in flooding that ultimately killed many Native Americans. Eventually the Columbia River weakened this dam sufficiently enough to let water pass, but leaving a natural footbridge connecting Oregon and Washington. After many years, this footbridge eventually weakened and rapids took the place of the bridge. The modern bridge was built in the 1920s.

Two miles east from here will be Rock Cove followed by the Columbia Gorge Interpretive Center (A2), a great place to stop and learn about the history and future of the Gorge. The visitor center itself was inspired by the sawmills of the past and feature photos of the pictographs and petrographs that are now underwater due to the dam.

A Forest Service Visitor Center is inside the Skamania Lodge (I1) main lobby. The lodge itself is now a resort built in the 1990s. One mile east of the lodge, Stevenson is also a great place to stop for information, food, fuel, and other services.

Approximately nine miles from Carson, there is a parking area for Dog Mountain (H5). The primary trail is about three miles long and with an elevation of over 2,800 feet. It offers spectacular views of the gorge, Mount Hood, and the surrounding areas.

About eight miles from Carson is Cook and a left turn onto Cook-Underwood Road will lead you to both the Willard National Fish Hatchery (A5) and the Ice Caves Route.

Just up the road, the Spring Creek Fish Hatchery (A6) offers some great views of the Columbia River and a chance to see the fish hatchery in action. The hatchery was introduced to help protect and restore the area’s fish population. It sources water from the surrounding springs and recycles almost ninety percent of the water.

Hood River and White Salmon River both empty into the Columbia Gorge and you will notice many sailboarders as the strong crosswinds make this a sought-after area. The views of Mount Hood to the south and Mount Adams to the north make this area especially beautiful.

Shortly after this is the Dalles Dam (A7). The building of the dam began in 1952 and took 5 years to complete. One of the North America’s greatest, natural fisheries, Celilo Falls, was buried under the dam’s slackwater on March 10, 1957. The Dalles Dam Visitor Center is in Seufert Park (A8) on the Oregon side.

Near this point, the landscape become almost desert. Horsethief Lake State Park (H2) offers more Native American petroglyphs and pictographs, some trails and stunning views. As you continue, you will see some lava bounders all over the hillsides. A few miles after Wishram, the Columbia Gorge National Scenic Area ends.

At the US-97 intersection, consider going to Maryhill Museum of Art (M1) which features a Stonehenge-like park and historical buildings and artifacts. If you are here in the evening, you should also consider stopping by the Goldendale Observatory (A3) to learn about the night sky, astronomy, and telescope viewing.

Our drive officially ends about 78 miles in Plymouth from the US-97 intersection, but if you were to end it early, this is a good spot to do it and zoom north up to Yakima Valley or head south via the Sam Hill Memorial Bridge (B4) and take the Columbia Gorge Highway back.

The remaining portion of the drive to Plymouth is beautiful. Plymouth Park (H6) is always a nice place to enjoy a picnic and a short walk.

In Plymouth, you can either head North on I-84 towards I-90, head south towards the Columbia River Highway or I-82, where our Columbia Gorge drive begins.

Or if you are just getting started, you can head towards the Palouse Country by heading north on I-84 to the North US-395 turn off. Head east on the US-12 and merge onto US-124. Continue on US-124 until you merge back onto US-12. Following this for another seventy miles will bring you to Clarkston.

If you going in the opposite direction, consider continuing the drive to the Columbia River Mouth and Long Beach Peninsula.

The Columbia Gorge has many more adventures than we discuss here or in our Columbia Gorge drive. More information is available at www.fs.fed.us/r6/columbia/index.shtml.